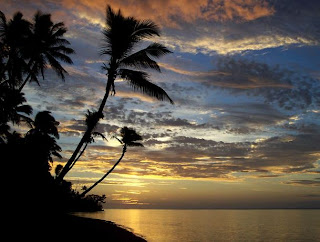 As Sally approached the table, the girl laughed and that simple sound stopped Sally in her tracks.  The words of the cafe owner rang in her head, something about everyone being happy.  Sally looked again at the happy couple, and realised that much as she would love to make the toad suffer in revenge for what he had done to her, she was not like him, and could not take away someone else’s happiness.  As she turned to walk away, she hoped fervently that the girl he was now with, was an innocent party in all this, and wasn’t part of the toad’s plan to trick her and steal her holiday.
Sally returned to the small stretch of beach in front of her shack, where she spent the next two days, relaxing, swimming and reading an old paperback crime novel she had found in the corner of her room.  She tried not to think about the toad and his new wife enjoying the luxury at the other end of the beach.  Mealtimes were something she began to look forward to, as the cafe owner; whose name she discovered was Luke, seemed to have taken pity on her and would join her for a drink and a chat at the end of each meal.   He was easy company, and before long, Sally found herself laughing and smiling and perhaps even beginning to enjoy her holiday a little.
The next day in the early evening, Sally was sitting at her usual table waiting for her meal as it was being cooked, when she saw a couple approaching along the beach.  As they drew nearer, she realised it was the toad and his wife, and they were headed straight for her cafe.  Sally froze, her eyes fixed on the couple unable to move.  When Luke appeared with her meal, he saw the expression of horror on her face and followed her gaze to the approaching couple.
When they reached the cafe, Sally looked on in surprise as Luke stepped in front of the empty tables and said, “I’m sorry, Sir, but we’re fully booked tonight.”
Sally felt a wave of gratitude to him, and watched on in amusement as the toad first looked up and down the deserted beach, and then back to the empty tables and chairs.
“But there’s nobody here,” he said, making a move to push past the owner and sit down.
“There is someone here, look!” the toad’s wife spoke up, pointing at Sally, seeming to see her for the first time as they tried to sidestep Luke.
The toad’s face dropped in recognition when he saw her. Clearly he had not expected to see her again, particularly not here in Fiji.   Sally smiled in satisfaction as Luke, politely but firmly moved in front of the toad once more and asked him to leave since there were no tables available for him.
The toad’s face flushed bright red as he glared at Sally with a mixture of anger and embarrassment.  He then turned to walk back down the beach, pulling his wife, who was protesting and gesturing back at the cafe, clearly not understanding why they couldn’t eat at the charming local beach front restaurant.
Sally smiled up at Luke as the angry couple walked away.  “Thank you” she said.
“That’s ok,” he replied grinning.  “I don’t want to lower the standard of my restaurant by having undesirable guests here.”
Sally laughed and lifted her drink in salute.  She suddenly realised, that now, she really was enjoying her holiday.
Finally the last day of her holiday arrived.  Sally sat on the beach, her broken heart almost forgotten in this island paradise.  She understood now that she had not loved the toad, or she would not have been able to get over him so easily.  She realised too that leaving this small island paradise was probably going to cause her a greater heartache than she had felt merely a week ago when she had arrived.
Further down the beach, Sally noticed a small boat gliding into shore.  As the people aboard jumped into the gentle surf and pulled the boat up onto the beach, Sally watched as a girl came racing out from the palm trees that fringed the beach and flung herself into the arms of one of the men from the boat.  Sally smiled as she watched the joyful reunion of the young couple.  They hugged and then fell into a long and passionate kiss.  Sally almost felt she shouldn’t be watching, but when the couple broke apart, Sally leapt up in surprise as she recognised the young girl.  It was Luke’s wife!  But then who was this she was kissing?