Well I've just returned from a lovely 2 week break driving and camping down the East Coast of our wonderful Australia! We had a wonderful time, but it is good to be back in the warmth of Cairns, and with the kids back to school I'm catching up with the washing, tent airing and general unpacking and settling back into home!

Before I get into a few photos from our holiday, I was very happy to find out that while I was away, my entry of a pillowcase handibag, into the iron crafter competition run by Fireflies and Jellybeans made the top ten!! Yippee!!  I didn't then win, but was amazed once more by the creativeness of so many people!  Congratulations to the winners!


But back to the holiday and a few photos:

Here's where we went in Queenland (top right hand corner of Australia) : starting in Cairns and driving down to Brisbane, around 1700km

First stop was Townsville, and the highlight for the kids was the free water park on the esplanade... 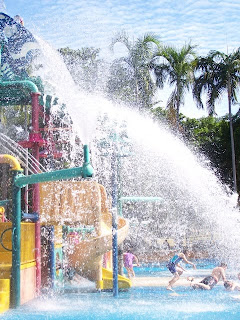 Next we went on to Airlie beach, where we did a day cruise around the Whitsundays islands.  We had been there about 12 years earlier, and wanted to show our girls Whitehaven beach, which is quite spectacular!  Unfortunately that was the only wet and cloudy day we had on the trip, but we still had a lot of fun, and even saw a whale!  Here's how we saw the beach from the lookout: 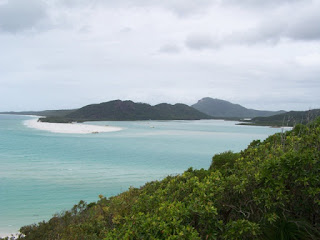 And here are a couple of pictures of Whitehaven beach on a beautiful sunny day, so you can see why we wanted to go back so much: 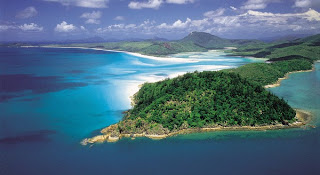 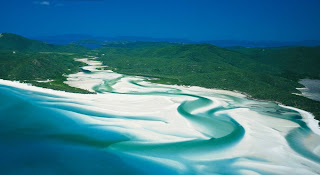 The sand is so white and fine it's like snow!  Just amazing!

And the sunset at the end of the day sailing home was lovely too!! 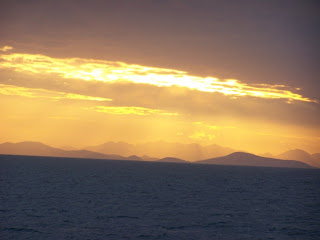 Next stop was south and inland a bit up into the hills to Eungella, where we had a fantastic view down the valley from our campsite (here's our tent - a room on one side for us, and one on the other for the girls!): 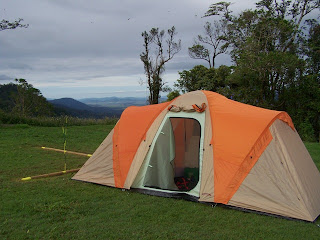 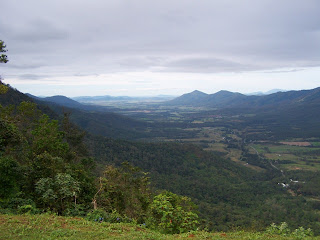 We went up here to see Platypus in the wild!  A pretty special sight - not so easy to photo since they're only about 30cm long and come out at dusk!!  But here's one! 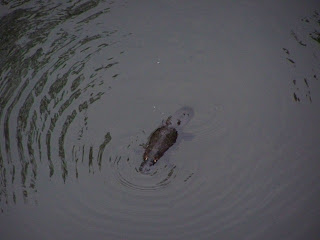 We did see lots of other wildlife, possums, kangaroos, and lots of birds including this Kookaburra very close up, munching on a locust!! 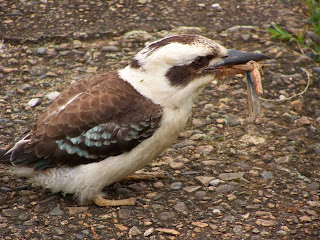 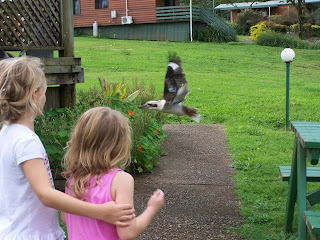 More wildlife was seen at our next stop Australia Zoo.  I was hugely impressed with this place.  It's owned and run by the Irwin family (I'm sure everyone remembers Steve Irwin - The Crocodile Hunter).
Apart from the Elephants, the zoo had much the same selection of animals as other smaller parks in Cairns, and other locations around Australia, but it managed to present them in a different way.  It's very much centered around conservation and that theme shines strongly through in all the displays and shows.
For a large, commercial, and hugely popular park, it manages to get across this vital message about conserving our wildlife.  I know some people think it's too commercial, but it's nice to know that some of that money (and I do believe it is a large part) is going back to the environment, animals and conservation.  I think of parks with that message as being small, run by volunteers and entry is the cost of a donation.  The Irwins have found a way to reach the masses with their message - and gain donations from people who may not otherwise give money to the cause - but in this way they get a fantastic experience out of it themselves!

The best part for me was the show at the crocoseum, where we saw amongst other things, the crocodiles being fed.  The Irwins (Terry, Bindi and Bob) are all very entertaining too! 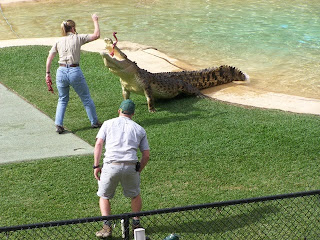 Our final stop was Brisbane, where we were lucky enough to stay in a city centre appartment - a nice change after camping, especially since the temperature was quite a lot cooler than we were used to!

On the last night, we went to see an AFL (Australian rules football) match at The Gabba.  My team ( the Brisbane Lions) unfortunately didn't win, but as always it was exciting to be there at a sports match!  Here's our star - Brendan Fevola kicking a goal!!! 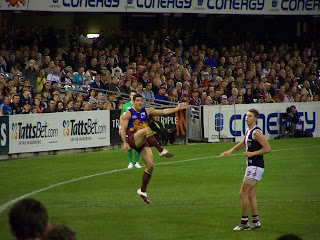 We then spent the last two days of the holiday driving back up to Cairns.  Things didn't start well at 4.20am on our first day with a flat car battery!  Fortunately the RACQ man was just next door, and we had a new battery and were off just 40 mins later!

All in all a fantastic holiday - heaps of new experiences for the kids, and a good break for us - with plenty of fresh air!

Time now to get back to reality!